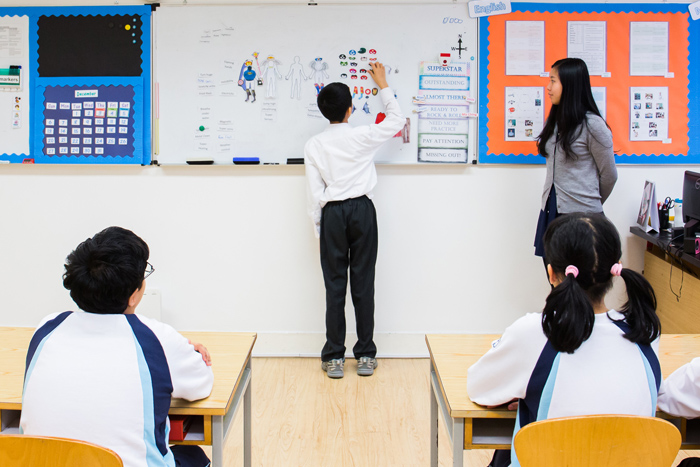 Autism Partnership Success Story: A Mom with an Extraordinary Son

I can still remember the day when my son was born and how happy I was when looking at him cuddling in my arms – that was the happiest moment of my life. When he was 3 years old, his teacher told us he had a lot of problems in class such as inattentive and non-compliance.  Although we also noticed he was different from other children of the same age, we chose to ignore it. It was not until his teacher kept advising us to get him assessed, that I finally decided to take him for a check-up despite my doubts. All the medical and professional reports showed that he has Autism Spectrum Disorders (ASD). Though it was difficult to accept, we had to face the truth nonetheless. I started to research about ASD and gather information about effective treatment methods for ASD. I also resigned from my full-time job and spent time to search for effective methods to treat my son.

In the first two years, despite everything we tried, including Sensory Integration (SI), Speech Therapy (ST), Physiotherapy (PT), Musical Therapy, attention and fine motor training, none of these treatments were able to help him to control his temper tantrums. We felt helpless and every moment with him felt like a struggle. Simply taking him out for lunch was a huge challenge. He would have a meltdown on the street, yelling and screaming because we had taken a different route home.

We were fortunate to be able to find a good kindergarten with teachers who were patient and understanding. We had a packed schedule every week, attending parent seminars and workshops. On the other hand, we also had to deal with the opinions and curiosity of our friends and relatives. Indeed, the current society has little, if any, understanding or knowledge about autism.

When my son was six years old, we found out about Applied Behavior Analysis (ABA) and Autism Partnership (AP). He started a weekly training of social skills and later changed to intensive ABA training. In a short amount of time, he already started to show significant progress in learning how to control his temper and impulsive behavior as well as how to engage in social interactions with his peers. In addition, through the parent training provided by AP, I started to master skills to get along with my son. Therapists often asked more of him, whether it was enhancing the difficulty level or changing the way training usually operated, and this would sometimes make my son disheartened, as he would have to put in more effort to meet the target. However, it was obvious that he still very much enjoyed the training sessions with his therapists.

At the same time, my son was entering primary grade one. We were fortunate enough to be able to find a school that prioritized student ability rather than completing homework. AP was also involved in my son’s Individual Education Plan (IEP) meetings at the school, as well as working with his teachers so he could have special assistance and shadow teacher to help him adapting to classroom learning, such as following teacher’s instructions, paying attention, socializing and building relationships with his classmates.

While he did very well in primary one and two, by P. 3 school teachers unfortunately did not have as much time to take care of individual student needs because all mainstream schools have to face the Territory-wide System Assessment (TSA) at P.3 and P.6 and all teachers were under much stress to ensure students passed the assessment. My son, like many other ASD kids, had superior English skills compared to Chinese. However, all other subjects were taught in Chinese, so it was especially difficult for him to excel in those subjects as a consequence. By P.3, the school had a new principal and this dramatically changed the focus and attitude of teachers as well as the school’s acceptance culture. Many of the teachers we knew left the school, and I also decided my son needed to change schools.

In the new school, P.4 was yet another nightmare. We both were overwhelmed by the academic homework. Every night I struggled with him on his homework until 11pm, and this strained our mother-son relationship significantly. In addition to this, I was often very anxious about teachers calling because I was so afraid that they were calling to complain about his disruptive behaviors in the class.

Like most typical mom, I always thought mainstream schooling would be the best for his future.  One day I read his response to a Health Check Survey. I was alarmed to see how negative his self-ratings were. That night, he suddenly told me that he had passed his “golden age period”, and started sobbing, asking me if the sole purpose of being born was to do homework. At that moment, I was shocked. I spent a long time thinking hard about what to do. I had a long discussion with my husband and started to look for other options of education for him, such as homeschooling, international schools, special schools, etc. We decided to leave mainstream schooling in order to provide our son with a more meaningful and enjoyable learning environment, and to rebuild his self-confidence.

Although autism is a type of special needs education, in Hong Kong, the admission requirement for entering special schools is based on IQ assessment, which would have to be lower than 70. Thus, my son was not qualified for it. We had also tried to find some schools with Special Education Need (SEN) support but we were unsuccessful. Finally, we chose AP School mainly because of the learning environment. AP School could design a customized program to meet his needs. Also, the school adopts Applied Behavior Analysis (ABA) treatment into its teaching methods. The teachers there discussed with us every three months regarding our child’s IEP, as well as his progress and the next step of learning objectives. My son has been studying there for two years. He is now able to really enjoy his classes, with a manageable workload that enabled more free time for him to develop his individual interests, e.g., reading and story writing about comic characters. More recently, he produced his own songs and lyrics about his favorite comic characters. Of course the songs were very simplistic, but we were nevertheless thrilled at this level of creativity. The ABA-based teaching has effectively helped him to gain skills such as attention, compliance, question asking and team-playing skills and social skills.

Looking back at my life over the past years, I realized how much the struggles and strife have changed my entire perspective in life. The challenges we faced have made me and my son’s relationship stronger. All I hope for now is for him to become a happy, healthy and independent person. During this time, I was also able to make friends with a group of SEN parents, and realizing that the situation for other SEN students was not much better than mine was either.

In 2013, I joined together with other parents in the similar background to visit Taiwan.  We visited SEN-related organizations, secondary schools, universities and legislative council in Taiwan.  We were greatly inspired by the courage of SEN parents and their tremendous efforts to enhance SEN teaching methods and protect the rights of SEN individuals. Thus, we decided to establish SEN RIGHTS. At SEN RIGHTS (http://www.facebook.com/SenRights), we hope to advocate the rights of students with special needs, so that they may have an equal opportunity for education.