It’s not easy: The bittersweet journey of being Kimi’s mother | Autism Partnership 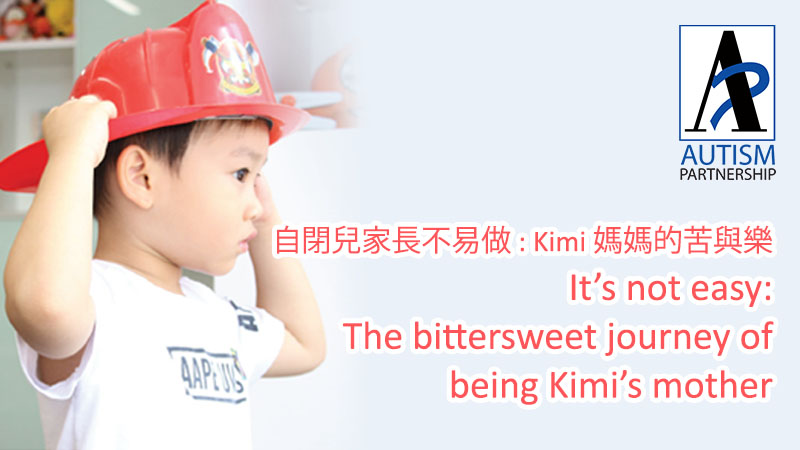 It’s not easy: The bittersweet journey of being Kimi’s mother

At first glance, Kimi seems like an ordinary child with an adorable smile and an energetic temperament. Upon understanding him, you would realise that he took a long journey which started back when he was diagnosed with ASD. Kimi first came to AP when he was 2 years and 7 months old. At the time, he was non-verbal and exhibited a multitude of problem behaviours. After a year and a half of intensive ABA therapy in AP, he has improved significantly and returned to a mainstream school, learning quickly with other peers! We are happy to have Kimi’s mum, his supervisors, Christy and Ivy share the journey it took for Kimi to get to where he is today.


1. What problems did you notice in Kimi at his earlier ages?

Kimi was diagnosed with Autism Spectrum Disorder (ASD) when he was at the age of two. Before he was diagnosed, he has already showed signs of delayed speech in comparison to his typically developing cousins who were of similar age. For example, he could not say “Ma” or “Pa”.

Nevertheless, we did not seek for professional help at that time as we thought it was just minor language confusion as Kimi was learning 2 languages at the same time. We spoke in Cantonese with him while our domestic helper communicated with him in English, so his pronunciation in Cantonese was always not accurate. We thought as time goes by and if we were consistent in speaking in Cantonese, his speech would eventually improve.

From a young age, Kimi has showed certain atypical behaviours. For instance, he would unexpectedly run off at high speed, bang himself against the wall, or he would be highly obsessed with the vehicle wheels. Then again, we thought he was just being naughty and seeking for attention. Back then, my husband and I both had full-time jobs so we did not have the time to pay much attention to all these behaviours.

It was not until I heard from his kindergarten teacher about his problems in class, and I knew we had to take action immediately. The teacher informed me that Kimi had quite a few behavioural problems–he would not sit nicely nor listen to classroom instructions, and he was not able to speak in nursery class. With all these obvious red flags, the teacher suggested us to take Kimi for an assessment. 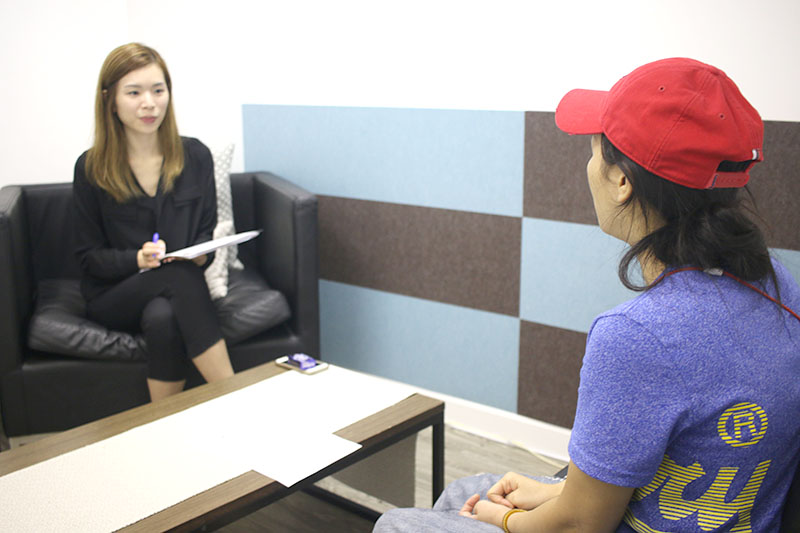 2. How did you feel upon learning about the diagnosis?

From the teacher’s feedback, we initially thought Kimi had Attention Deficit Hyperactivity Disorder (ADHD), but instead, the nurse of the Maternal and Child Health Centres told us that Kimi appeared to have ASD and referred us to conduct a more in-depth diagnostic evaluation. At the time, both my husband and I were very shocked. Our knowledge of ASD was very limited–all we knew were the stereotypes of ASD portrayed in TV dramas: reticent to talk, engage in odd behaviors – everything was so unclear to us.

After having confirmed Kimi was in fact diagnosed with ASD, we were deeply saddened and in disbelief, but we soon accepted it and spent days in researching to source for ASD treatments for my son. We thought there were medicines to cure ASD but it seemed impossible. Fortunately, a friend referred us to Autism Partnership (AP), and AP arranged a thorough assessment and months of ABA therapy training for Kimi.


3. Kimi has been receiving ABA therapy in AP for two years, what impressed you the most in terms of his improvement?

I am most impressed with his improvement in language. From non-verbal, not making a single sound to where he is now, where he can communicate fluently with others. I remember there was a time, I was exhausted and I said my shoulders were sore. He must have had overheard, and came to me and said “Let me give you a massage. This will make you feel better!”And just two years ago, I would never have imagined this kind of interaction would happen between us.

I was also very impressed with his improvements in logical thinking and observational skills. He was able to generalize what he has learnt and applied in his social life. Just the other day, we went bike riding in a park and Kimi invited a little girl to play with him. He knew the little girl was too short and had difficulties in riding a bike nicely. Yet, he kept encouraging her in trying and they clearly had some enjoyable times together. I was very touched to witness all of this. 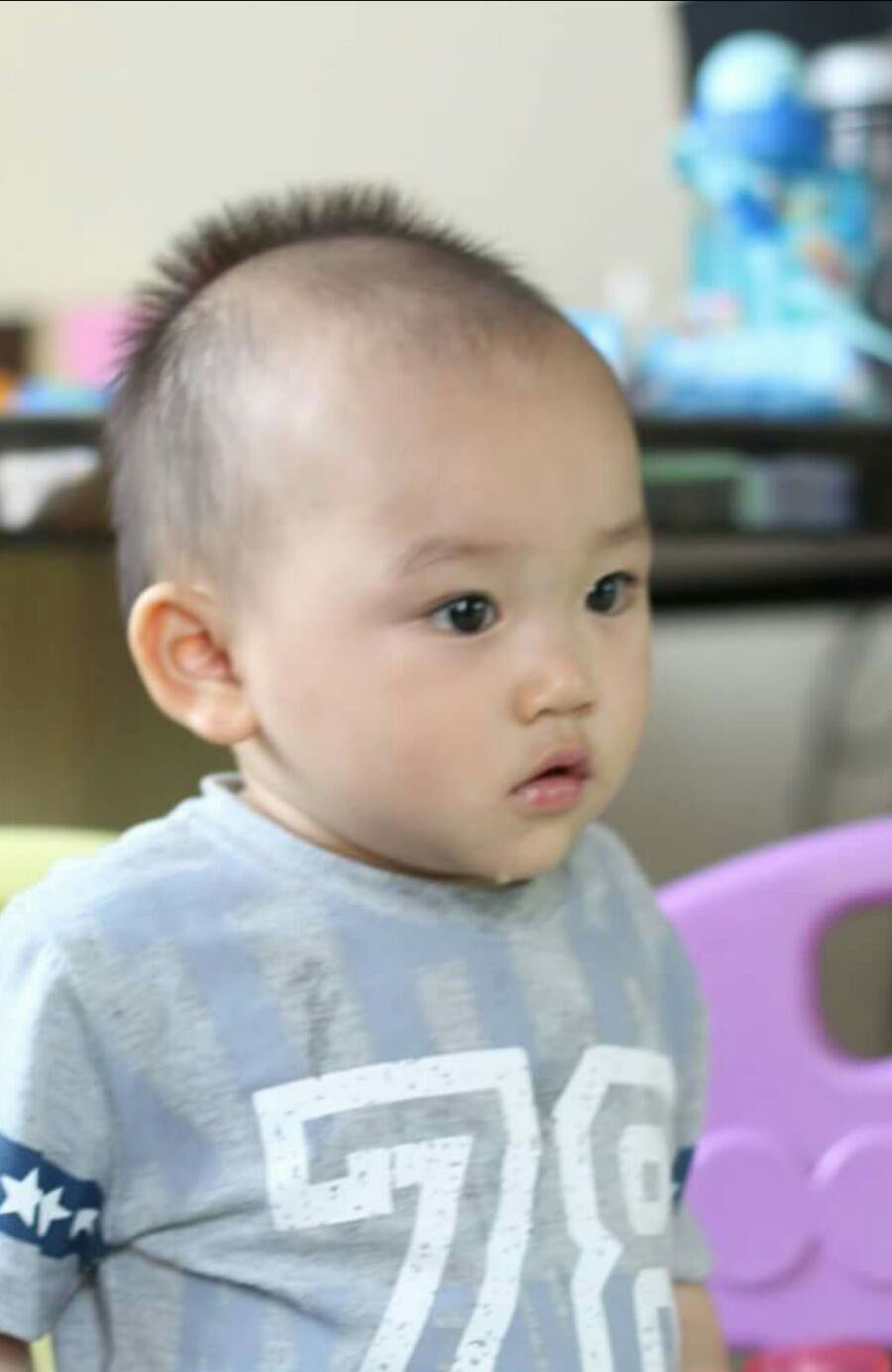 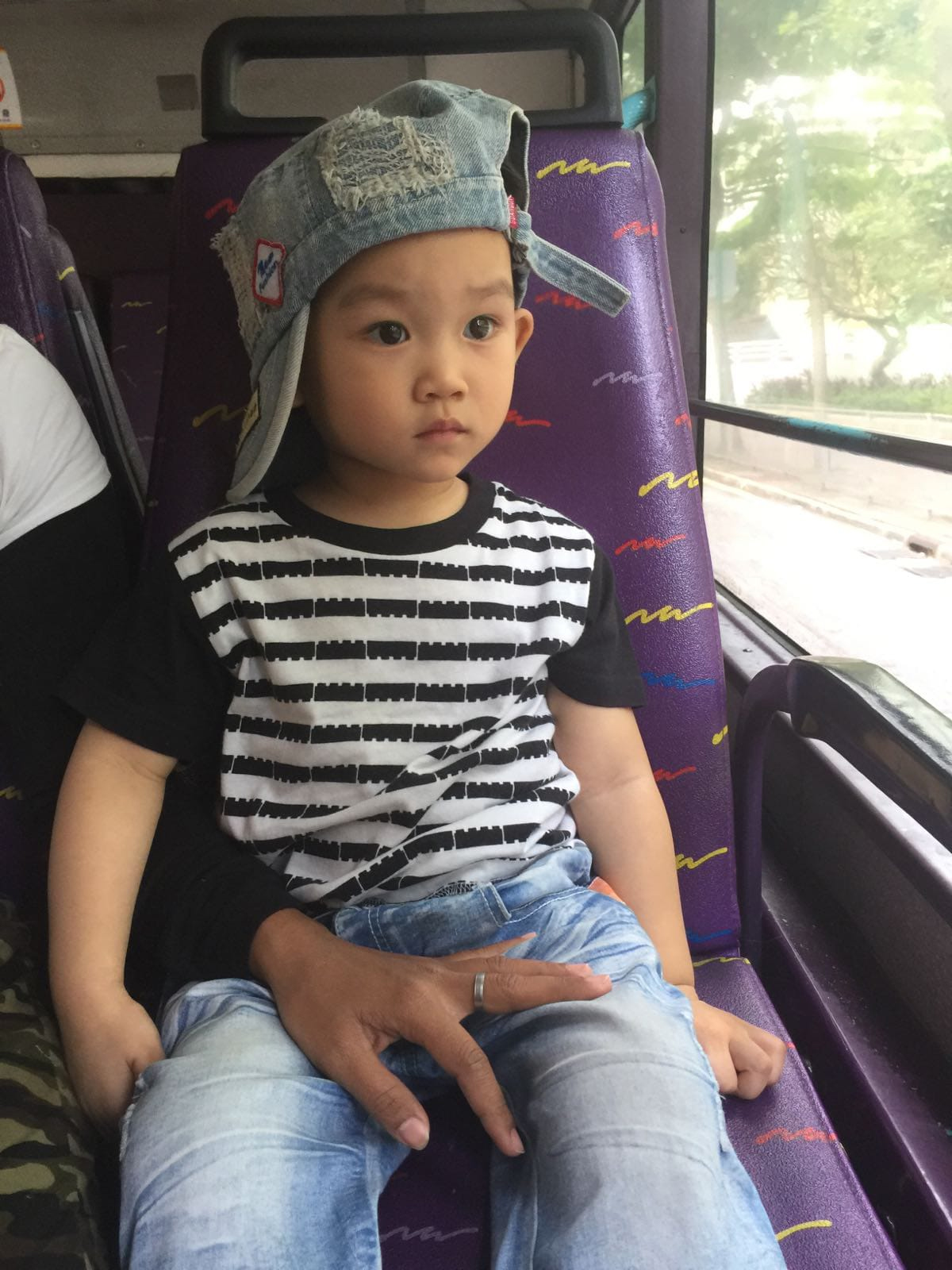 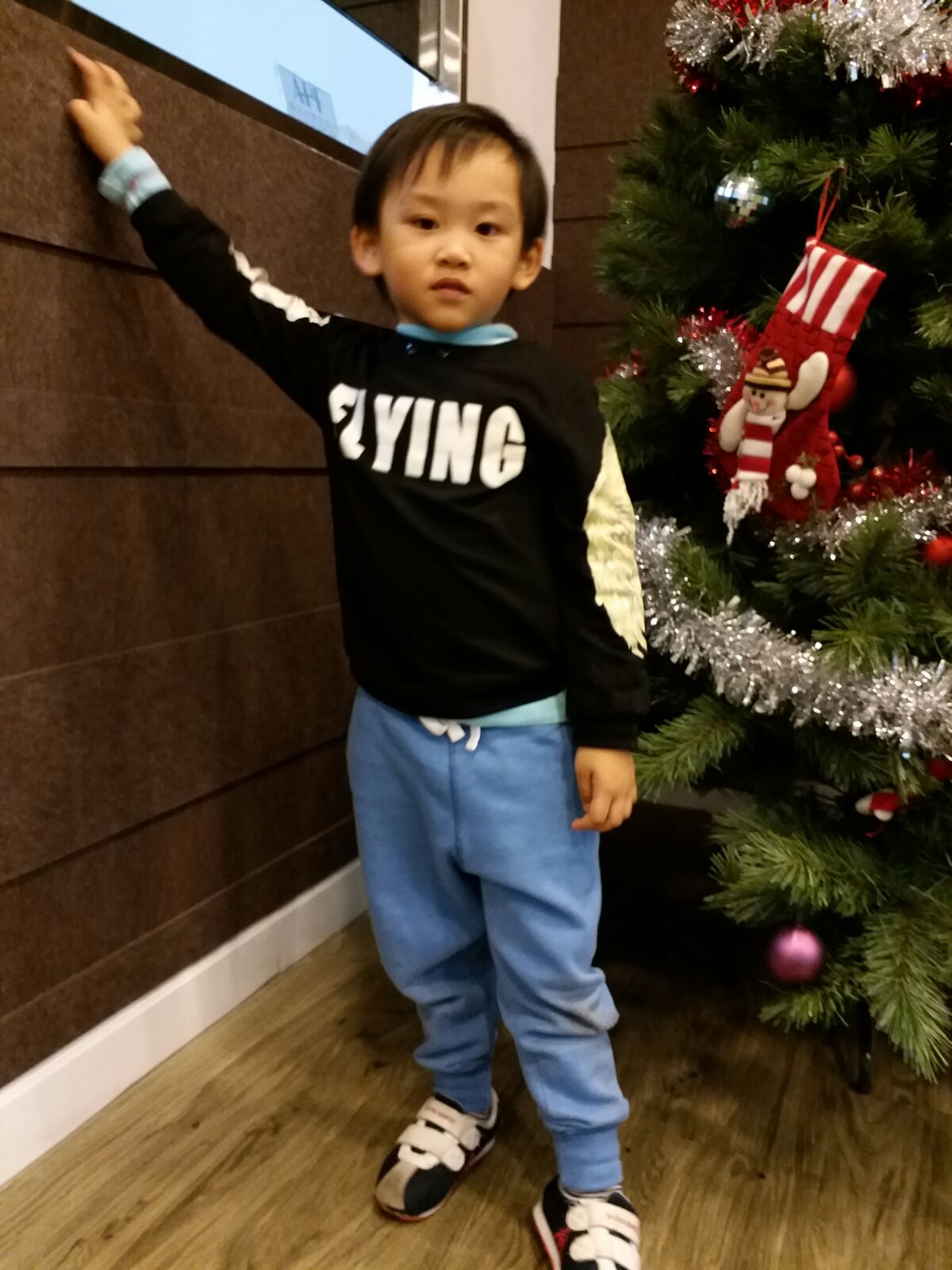 4. Everyone in AP was excited to see that Kimi has successfully transferred to a mainstream school. However, before he has joined AP, he has attended a nursery class in a kindergarten, but he was not able to adapt to the environment. What are the major differences between now and then?

I really can’t compare the two scenarios as Kimi has changed completely. We ran into his old kindergarten teachers some time ago, and they also thought that the way Kimi behaves now was completely different from what he was back then.

In the past, very most likely due to the lack of the ability to comprehend verbal instructions from teachers, Kimi would mess around and misbehave, especially during music lessons and at story time. The situation was so bad that the teachers had to set up a circle to separate Kimi from his classmates. Kimi was asked to stand inside the circle so he couldn’t disturb the class. That period was very miserable for him, he would cry every morning just from seeing his uniform. This was a heart-breaking period for our family.

Now he is very attentive and enjoys being at his new school. Since he is a transfer student, he is not familiar with the school song, school chants and school motto, but he tried his very best to observe his peers and catch up with them. After school, he will share with me the things he has learned and the highlights of the day. It seems to me that he is having an enjoyable school life! 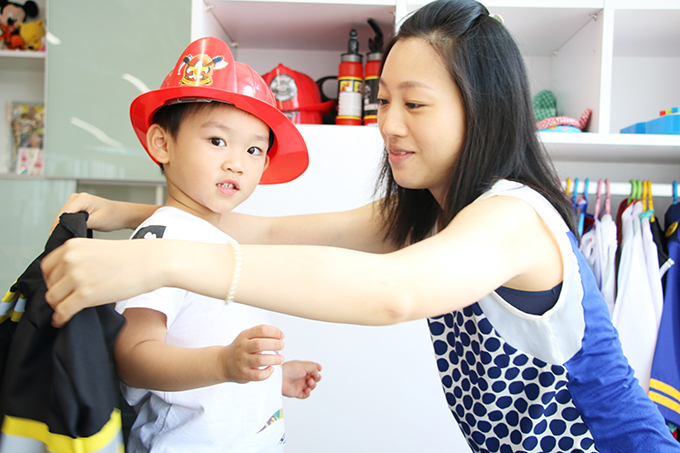 5. What are your expectations of Kimi?

Like all of the therapists in AP, we hope Kimi can use his unique perspective and experiences to help other people with ASD. But at this moment, his biggest dream is to become an automobile repairman. Haha!


6. What do you want to share with all the other parents of children with ASD?

First, I would like to encourage parents to embrace the fact that your child is different. Do not avoid or feel ashamed to seek help from the professionals, otherwise you will miss the golden opportunity for your child. Taking myself as an example, I didn’t conceal Kimi’s diagnosis from people around me. That’s why a friend of mine could recommend AP to us. Recently, one of my friends’ son was diagnosed with ASD. Since I always share ASD related information online, she knew I could provide helps to her and refer her son to AP. I believe being open-minded not only enabled me to help my son, but also other families in needs.


Kimi has been receiving ABA training at Autism Partnership HK since January 1, 2017. He was 2 years and 7 months old when he first arrived AP. He was receiving full day intensive 1on1 ABA training and group sessions to train up his language, behavior, learning how to learn, social and group skills. He has improved greatly since then and now is studying in a mainstream kindergarten.